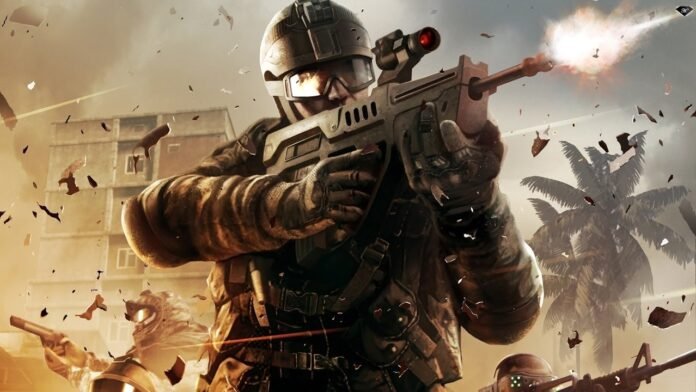 Gamers love shooting games worldwide to spend some quality time killing zombies or terrorists to relieve stress. It may sound a little disturbing to non-gamers but is satisfying and competitive, to say the least. The latest developments have ensured heavy graphics to create a life-like experience on the screen.

Many franchises have put their best effort to lure modern gamers. The storylines, modes, and the controls have all evolved. It makes the games in the list superior to their predecessors in performance.

In this blog, we have enlisted the top shooting games of the year 2020 for the PC platform. We have included both FPS and TPS games on the list to make it more competitive.

Superhot is an intuitive new game that made it to the list of best games of the year. The lack of heavy graphics should never be the reason to judge this game. It engages the player in a violent environment with a fun element of puzzles.

The visuals are quite unusual for the genre. It keeps you engage with rather bizarre, time-freezing gameplay, that includes endless modes and challenges. However, the primary campaign won’t last 2-3 hours of gameplay from some skilled gamers.

Halo has been making to the list of best shooting games from a time unknown. The iconic game maintains its status quo with another fast-paced, sci-fi game, Halo: Reach. The game is now available on the PC with the Master Chief Collection.

The events take place before any other story told in the Halo universe. The gameplay supports ultrawide monitors, adaptive sync, 4K graphics, and many other features standard to the modern heavy-graphics games. You may find the performance a little disappointing, but the patches will be rolled out soon.

The fifth version of the Gears of War, without the suffix, is still the same immersive game. Its story continues the battle between the alien swarm and the Coalition of Ordered Government. The best aspects are storytelling, graphics, and some amazing mechanics.

People new to the series can start with the Gears 5 to get the taste of the series. We advise not to invest the money if the majority of the times you play multiplayer modes. The rest of the gameplay has somehow managed to make it one of the best in the category.

The 2016 game, Doom, was way better than the large part of the community has expected. The battle with the hell’s minion continues on Mars with the ultimate goal to slay Doom. Its gameplay includes the classic skeleton men, flaming skulls flying everywhere and some hordes of monsters.

Expect the same old feel of 1993 version of the game with the modern graphics and gory gameplay. Again, the multiplayer gameplay is a little disappointing with only two weapons at your disposal. Even the weapon feedback looks a little misbalanced in the multiplayer mode.

Simple yet creative gameplay combined with the dynamic nature of the game is what makes Vanquish a great game. You cannot stay in one place as it means certain death of the character. The story takes place in future with a Russian terrorist organisation planning to attack with a microwave emitter.

You should try this game if the regular shooting games don’t excite you anymore. You can invest in filling the next few weeks full of jet-powered nerve-wracking adventure. Take a debt consolidation loan for bad credit with no guarantor to get the credit limit back for the payment.

Not every time you have to save the world from terrorists or the aliens to enjoy a shooting game. Overwatch is fun to play, shooting game with cartoonish characters and colourful levels. The main focus is on the game modes where teams need to create defence and attack strategies.

The characters are different from one another with special skills and characteristics. You can put the Team Fortress 2 at rest to spend the next hundred hours building a team in Overwatch. There are only a few ways to buy items if you don’t want to gamble with microtransactions.

More weapons, demons, and amazing stage design make Doom Eternal a worthy successor of the original Doom. The battle is now on the planet earth, where the demons have invaded. Your campaign includes some iconic battles to ensure their retreat from the planet.

You can expect some creative ways to ramp up the already gory ways the demons were killed. Developers have improved on the stage-navigation and added some more secrets during the missions. Also, there is a 2 v/s 1 battle mode to add another element of fun and brutal killings.

Relive the glory of World War II with the Battlefield V in some gorgeous, action-packed scenes. There are war stories that keep you engaged for hours. Also, a 64-player battle royal mode puts the impressive setups to lightning-fast gameplay.

The purist may have a very good time enjoying the new content of the game. Other may find it repetitive with no worthy innovation on the gameplay. The environmental destruction in the multiplayer mode is something you can bank upon.

The loyal fans of Call of Duty were complaining over the years on the derailing of the franchise from its root. Activision has finally responded to the gamers and rebooted the franchise with the Call of Duty: Modern Warfare. All the unwanted elements have been stripped to lay a foundation with endless potentials.

The games come with a strategically designed single-player campaign and a dynamic multiplayer battle mode. Call of Duty is still one of the leading franchises in terms of sales.  The rebook manages to keep its domination with the stiff competition because of the multiplayer era.

It is hard to make a list of best shooting games with Counter-Strike in it. The iconic game remains the fan favourite after 8 years of its launch. The panorama UI, bomb scenario, and visuals are all appreciated over the years.

The graphics may look outdated when compared to the other games on the list. Also, the repetitive gameplay is a significant reason for the switch. But the extreme competition and tournaments will keep you engaged and motivated for endless hours.

To sum up, these are the top games on our list in the category of shooting games. We might have missed a few worthy titles because of some reasons. Also, the amazing titles in this list are not ranked; it is tough to name one game the best.